What Does the Future Hold for the Hearables Market? 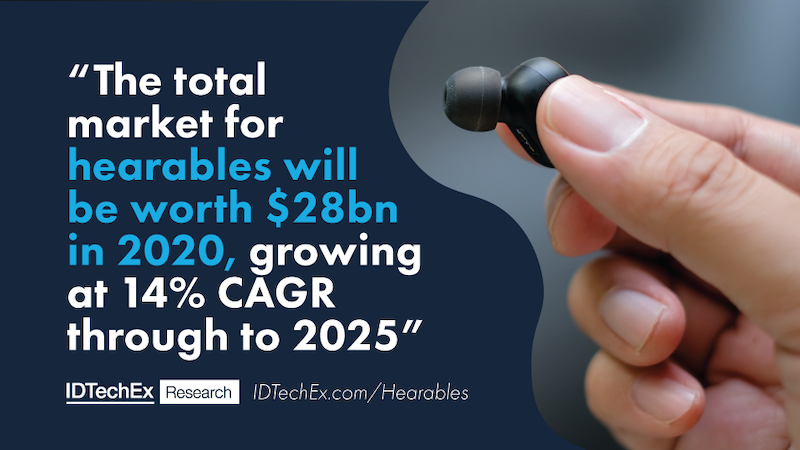 The first electric hearing aid was created in 1898, and was arguably among the earliest examples of wearable tech. So it's fitting that, more than a century later, on- and in-ear technology is once again leading the way - this time as hearables, a sector now poised for substantial growth.
A new report from IDTechEx, "Hearables 2020-2030: Technology, Players and Forecasts", provides a detailed and wide-ranging assessment of the current hearables market and relevant developments. Exploring historical data from 2010 to 2019, secondary research covering dozens of firms throughout the value chain and including interviews with more than 20 leading firms in the sector, "Hearables 2020-2030" also delivers market forecasts covering 2020 to 2030.

Put simply, hearables are wireless electronic devices that are worn in, on or around the ear. This traditionally includes connected wireless headphones and ear buds, with versions of the definition also including connected hearing aids and cochlear implants. The hearables market covers a broad range of technologies, end users and sectors at various stages of maturity. For example, the medical hearing aid market has been active for more than a century, but the consumer-facing wireless headphone market did not really gain traction until after 2010.
Apple's AirPods, launched in 2016, kickstarted the market, leveraging Apple's position to becoming the most commercially successful product in the space. This also triggered strong competition in that area as companies battled hard to compete - a battle that persists today.
In parallel to this commercial rise, another important evolutionary step has been underway, with the inclusion of biometric sensors within hearable devices. This development may prove crucial, for not only is it possible for biometric data to be collected from hearable devices right now, but the potential for biometric hearables is enormous. "Hearables 2020-2030" shows that biometric hearables are set to make a substantial impact on the consumer, over-the-counter (OTC) health and professional medical markets with a few years, with the market for hearables with biosensors set to reach $5 bn by 2030.

Why use hearables with biosensors?

Wearables with biometric sensors are nothing new - the Pew Research Center found that around one in five Americans now wears a fitness or activity tracker. These are most commonly worn on the wrist, but that market is beginning to see some saturation and so it seems ripe for innovation.
In this context, biosensors in or around the ear make perfect sense. Anatomically, the ear is an ideal location for biosensors because it is close to many useful, high quality biometric signals. For example:
These attributes can not only optimize many of the readings that conventional biometric wearables already track, but also generate new possibilities for consumers and medical professionals alike.
Unobtrusive, comfortable hearables that are comfortable to wear could increase compliance with medical monitoring or study (e.g. drug efficacy trials, ambulatory recording of heart rate or blood pressure). Hearables can also be used to monitor chronic conditions or general health and to track diet and fitness.
This progress has been supported by recent changes in the regulatory and legal landscape. In 2017, the US Congress passed the Over-the-Counter Hearing Aid Act and created a new class of hearing aid that is regulated by the FDA but can be bought and sold without the involvement of a licensed professional.
Prior to this, the hearing aid market was tightly regulated (as a medical field), which restricted access to market - consequently, biometric sensors within hearables were largely confined to consumer goods. However, the Act has opened the hearing aid market up to new providers and customers, all of whom will be keen to differentiate their products and brands.

It is clear from "Hearables 2020-2030" that the scope for biometric hearables to access and exploit multiple biometrics at once takes their scope beyond that of conventional health and fitness trackers and even hearing aids. An article by Poppy Crum, Chief Scientist at Dolby Laboratories and an adjunct professor at Stanford, explains that the ear is the ideal portal to access data on:
This means wearables may, in time, be integrated with other technologies including machine learning/AI and cloud computing to discern the physiological, physical and emotional status of wearers - and trigger actions in response. In this scenario, the hearable 'knows' how stressed the wearer is, how best to calm them down (prompting their smart speaker to play a favorite music track, perhaps), which direction they are looking in and how much mental effort they are making. Hearables with voice recognition tech will 'inform' the hearable how often the wearer is speaking, in what tone and even with what emotion.
Indeed, researchers at Cornell University are currently researching the use of hearables to track and translate facial expressions.
Such capability may sound futuristic, and not all of it is possible - yet. But a surprising amount of the knowledge and hardware/firmware required is either being developed, or has already been integrated into devices.

Where does this leave the hearables market?

The key message arising from "Hearables 2020-2030: Technology, Players and Forecasts" is that the technological and market landscape for hearables looks promising, but faces challenges. Specifically, the report finds that:
Meanwhile the wider hearables market, including non-biometric products, faces challenges that the report addresses. These include:
For more information on this report, please visit www.IDTechEx.com/hearables or for the full portfolio of Wearable research available from IDTechEx please visit www.IDTechEx.com/Research/WT
IDTechEx guides your strategic business decisions through its Research, Subscription and Consultancy products, helping you profit from emerging technologies. For more information, contact research@IDTechEx.com or visit www.IDTechEx.com.