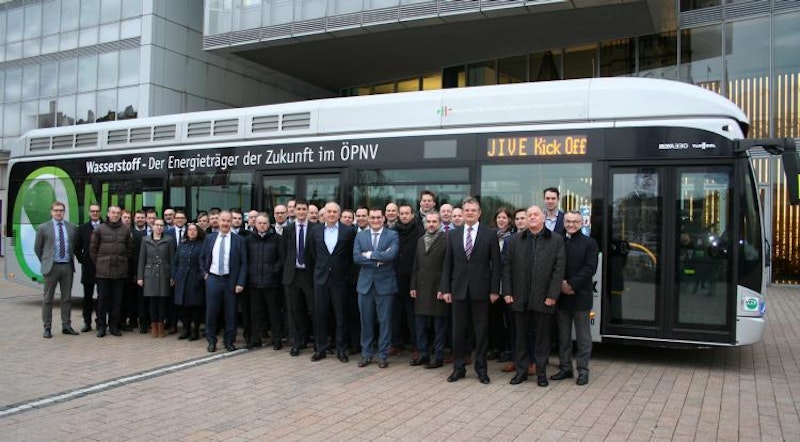 A prediction by analysts IDTechEx is turning out to be true.The window of opportunity is closing for fuel cell on-road vehicles to become mainstream.
Hydrogen infrastructure is headed for adequate levels in a few hydrogen friendly territories like Japan, Germany and California but FC vehicle output is badly behind plan.
California counted 25 hydrogen fuelling stations in December 2015, the California Energy Commission (CEC) and California Air Resources Board (CARB) report. Another 23 are in planning or early stages of construction. The goal of 100 H2 pumps by 2024 seems attainable - approaching adequacy but some way from it as in Japan.
Canadian fuel cell company Ballard Power Systems has just taken an order from the Zhuhai Yinlong Energy Group to equip ten buses with its fuel cell modules FCveloCity-MD 30. In contrast, Zhuhai Yinlong intends to build no less than 35,000 battery-electric buses this year though Yutong leads in these. IDTechEx believes FC buses and cars are turning out to be minority products offered into favorable territories. IDTechEx CEO Raghu Das says, "As those planning expensive battery-swapping road stations learned to their cost, in the next stage you fix the vehicle not the infrastructure. Stations supplying what is still fossil fuel hydrogen are extremely expensive compared to battery chargers and even these battery chargers will be needed less as we progress to better batteries and sometimes energy independent vehicles as with the Nanowinn microbus today. There are plenty of battery cars and buses with over 150 miles range already being delivered. Indeed, as private cars are increasingly discouraged and even banned in cities, the autonomous electric taxis and buses that take over will not wrestle with a hydrogen nozzle: they will be contactlessly charged."
The largest joint hydrogen vehicle project kicked off in Germany in January. The project JIVE will see the purchase of about 140 fuel cell buses from 2018, while project MEHRLIN will focus on setting up seven H2 fuelling stations for fuel cell buses. The buses will go in to service in Germany (near Cologne, Wuppertal, and Frankfurt area), the UK (London, Birmingham, Dundee, and Aberdeen), Italy (South Tirol), Latvia (Riga), as well as Denmark (Slagelse). Contrast these territories taken together purchasing thousands of pure electric battery buses at that time. The globally leading bus companies and some car companies are offering FC versions to complete their ranges, serving territories and operators favoring them.
"However, there are plenty of other niches opening up for fuel cell vehicles off-road, on water and in the air," reassures Das. For more see the IDTechEx reports on marine and airborne electric vehicles and Electric Buses 2017-2027, Electric Vehicles Change the World 2017-2037, Fuel Cell Vehicles 2016-2026 and Autonomous Electric Vehicles Land Water Air 2017-2027.
Top image: JIVE
Learn more at the next leading event on the topic: Sensors Europe 2020

EV Robotic Charger by PowerHydrant
IDTechEx Attends Autosens: Latest Trends in Automotive Lidars
Boost to the Electric Vehicle Motor Business
Find out how next week in Santa Clara at the IDTechEx Show!