Top Image: Various collaborative AMRs are shown here. This figure excludes picking mobile robots currently on offer. Some companies whose products are shown include Knapp, Omron Adept Mobile Robotics, Mobile Industrial Robots (Teradyne), Locus Robotics, Canvas Technologies (Amazon), 6 River (Shopify), Otto Motors, Fetch Robotics, InclubedIT, Caja System, NextShift Robotics, Algo Tech, iFuture Robotics, Berkshire Grey etc. To learn more, please visit www.IDTechEx.com/Mobile.
The trend of investment in and acquisition of mobile robotic companies seeking to automate the movement of goods within warehouses, fulfilment centres, and manufacturing facilities is still rising. Only in recent months, we have seen three notable activities: Amazon, Shopify, and Teradyne acquired Canvas Technology, 6 River Systems, and AutoGuide, respectively. In this article, we discuss some notable acquisitions whilst considering relevant technology and market trends.
The following discussion is based on our report "Mobile Robots, Autonomous Vehicles, and Drones in Logistics, Warehousing, and Delivery 2020-2040". This report provides a comprehensive analysis of all the key players, technologies, and markets. It covers automated as well as autonomous carts and robots, automated goods-to-person robots, autonomous and collaborative robots, delivery robots, mobile picking robots, autonomous material handling vehicles such as tuggers and forklifts, autonomous trucks, vans, and last-mile delivery robots and drones.
We provide technology roadmaps and twenty-year market forecasts, in unit numbers and revenue, for all the technologies outlined above (13 forecast lines). We built a twenty-year model because our technology roadmap suggests that these changes will take place over long timescales. In our detailed forecasts, we clearly explain the different stages of market growth and outline the key assumptions/conditions as well as data points that underpin our model.

Canvas Technology, a company based in Colorado, had developed an advanced navigation technology, enabling its mobile platforms to achieve intelligent autonomous mobility. The company had developed navigation algorithms based on high-definition RGB cameras, enabling the robot to detect and classify objects. This is an advancement over earlier generations in which the navigation was achieved using only 2D ranging lidars. The additional object detection and classification capability enable the robot to operate in more dynamic, complex, and challenging environments, and to achieve more intelligent path planning in response to different objects and environments. In short, it puts the company on a technology roadmap with ample room for development and improvement.
Previously, Amazon had famously acquired Kiva Systems in 2012 for a huge 775$M. This technology has allowed Amazon to boost the productivity of the latest generation of its fulfilment centres by automating the goods-to-person step. The robot fleet is estimated to have increased at an approximate rate of 15k or so robots per year and was estimated to have recently reached 100k units.
The latest acquisition should be seen within the same trend of automating fulfilment. The technology of Canvas allows automation to be implemented in existing centres whose infrastructure cannot be readily altered to enable Kiva-like goods-to-person autonomy. Furthermore, this technology gives an excellent pathway towards autonomising larger vehicles such as forklifts and tuggers. As such, it extends Amazon's capability to all manner of vehicles and situations found in fulfilment automation. Amazon considers this a core strategic competence. 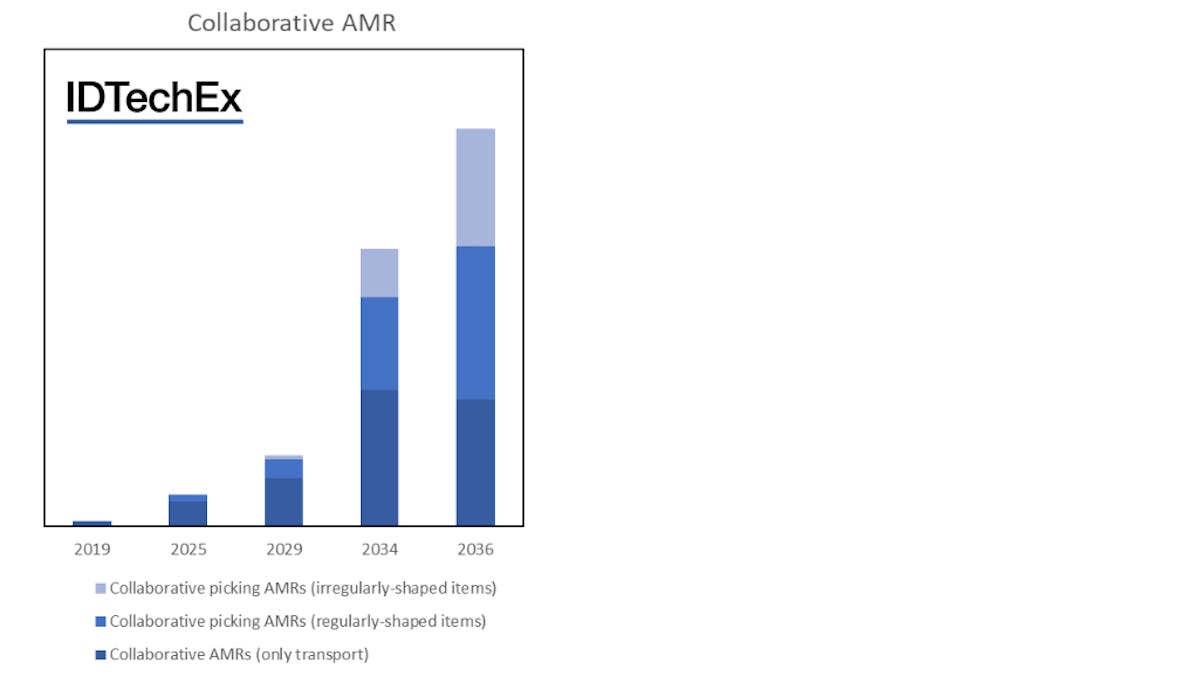 This shows market projections in unit numbers for collaborative mobile robots. We can see that picking robots will start to grow their share in the long run. To learn more, please visit www.IDTechEx.com/Mobile.
Shopify acquired 6 River Systems for $450M (60% cash) which represents a huge multiple probably in excess of 20-23. 6 River systems had previously raised $45M, and in the summer of 2019 their robots were deployed in 30 customer sites (some using the 8-robot start kits and some having as many as 50 robots in a building). It did have a strong sales pipeline which could have resulted in >500 robot unit sales in 2020. However, this uptick in sales on its own does not justify the valuation.
6 River also had an interesting technology. The majority (70% or so) of its 150-person team were focused on the software aspects. Within the software team, the smaller sub-team focused on autonomy algorithms and the larger sub-team on cloud-based fleet and task management software.
On the autonomy side, 6 River used both lidars and cameras. The lidar map, built during the initialization phase, would be curated by engineers, uploaded onto the cloud, and used by the fleet within that specific environment. Camera technology could also enable it to detect and classify objects, thus achieving more responsive path planning algorithms. On the higher-level software, they had developed algorithms to optimize the movement of the fleet to achieve reliability and speed in fulfilling multi-item requests. They could also share learnings amongst the entire fleet via the cloud, setting in place a learning loop that could enable the algorithm to be constantly improved. These technology choices- with regards to both autonomy and cloud-based fleet/task management- placed 6 River in a good position in the short and long terms.
Shopify was motivated to make this acquisition as it had in June 2019 announced the Shopify Fulfillment Network. 6 River's vertically integrated full-solution approach allowed Shopify to bring the entirety of a key strategic competence inhouse. The technology will likely be initially rolled out at select 3PLs before Shopify puts in place its own infrastructure.
The taking off the market of another mobile robotic company through acquisition will put third part fulfilment centre operators in a difficult position as to which technology to adopt in the future. This suggests that system interoperability and ease of integration with an existing automated system will become important in the future as operators do not want to be blind-sided again
Another acquisition this year was that of Teradyne paying $165M ($58M in cash and the rest if certain performance targets are reached) for AutoGuide, a company with barely $4M in revenue in 2018. Teradyne had 1.5 years ago acquired Mobile Industrial Robots (MiR) for $148M. MiR developed SLAM-based mobile platforms, mainly acting as low-payload deck-load mobile conveyors. Teradyne had also acquired Universal Arms (UR) for $227M in 2015. UR is the pioneer and leading supplier of collaborative arms. Teradyne also owns Energid.
This acquisition- if the entire $165M is realized- represents a huge multiple even when considering the projected doubling of the revenue of the target company. This acquisition enables Teradyne to expand its product portfolio in the warehouse and logistics automation business. In particular, it complements MiR's product line-up, bringing it to the AGV (Automated Guided Vehicle) as well as SLAM-based high-payload vehicles such as tuggers. As such, it exposes Teradyne to every sector of the market even if the acquired firms are operated as stand-alone concerns.
The SLAM-based navigation is lidar-based. This technology-based on natural feature extraction- can also be used in forklifts, giving the firm the chance to expand its product portfolio further. Indeed, an interesting choice made by AutoGuide was to design its own platforms in a modular way, enabling one tool to be changed into another in a short time. The choice to make its own platforms also give the company vertical control, eliminating the risk that a third-party supplier unexpectedly changes a feature in the platform which would put the autonomous fleet at risk.
Many firms in this space have also raised notable funds. One prominent example is Geek Plus (China), who has raised $389M since 2015. The firm is pursuing an aggressive expansion strategy. It has delivered over 7k units of its fiducial-based goods-to-person robots, which operate in the same was Amazon's Kiva Systems. The company is now expanding its production capability and tipping its toes into the area of autonomous forklifts. The additional capital is justified on the basis that there is significant merit in having a large installed fleet (market share). Furthermore, the capital is required to invest in production capacity.
Another firm in the same field who has raised notable sums is GreyOrange. It raised $140M in 2018, bringing its total to $170M. This Indian firm- with offices in Singapore and now the US, has a well-engineered product and has recently announced winning large-scale deployment orders.
We assess that the market for such autonomous mobile robots (AMRs) will grow. There have also been prominent investments and acquisitions this year, e.g., by Shopify and Amazon. Overall, we forecast that more than 200k robots could be sold within the 2020-2030 period (this figure includes those that can perform picking of regularly or irregularly shaped items). To learn more about various companies, market and technology trends, and to access our detailed market forecasts please see the report "Mobile Robots, Autonomous Vehicles, and Drones in Logistics, Warehousing, and Delivery 2020-2040".

Picking or grasping technology is an essential component of warehouse automation. Today, many firms and research groups are deploying deep learning to enable robots to pick novel and irregularly-shaped items rapidly and with high success rates. To this end, various strategies to data collection/annotation and to DNN training are being followed.
A limited number of firms have integrated picking arms on mobile platforms. Today, these mainly picked box-shaped items in known environments. However, technology progress will bring these technologies to more varied items. It will also allow better integration of the robotic arm with the mobile platform.
We forecast that picking mobile robots able to pick regularly shaped items will be in the learning and low volume deployment phase until 2024. Thereafter the sales will pick up. However, only after 2030, we forecast significant annual sales volumes. As for robots able to pick irregularly shaped items, we consider that the development and low-volume deployment phase could last until 2030. In the longer term though, we forecast that 36% and 38% of AMRs in warehouses sold in 2040 will be able to pick regular- as well as irregular-shaped items, respectively. This points towards a major technology transformation, requiring automation beyond just autonomy of movement.
The report "Mobile Robots, Autonomous Vehicles, and Drones in Logistics, Warehousing, and Delivery 2020-2040" provides a comprehensive analysis of all the key players, technologies, and markets. It covers automated as well as autonomous carts and robots, automated goods-to-person robots, autonomous and collaborative robots, delivery robots, mobile picking robots, autonomous material handling vehicles such as tuggers and forklifts, autonomous trucks, vans, and last-mile delivery robots and drones.