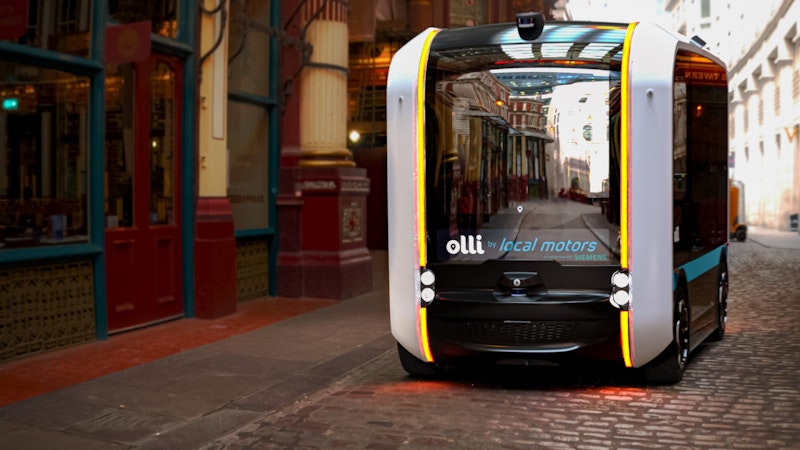 Local Motors with its Olli robot shuttle is progressing at a furious pace making others look - well - pedestrian. This genuinely symmetrical (no U-turns) multipurpose machine has the essential large sliding doors for the disabled and fast entry/exit. Designed to purpose, envisaging easy configuration for hospital patients on beds, etc. 3D printed, its in-wheel motors from Protean Electric provide vectored traction for bad weather and Local Motors is even progressing air-less tires.
In an industry first, The Goodyear Tire & Rubber Company has developed a non-pneumatic (airless) tire (NPT) and wheel assembly to support autonomous vehicle transportation in a city setting. It trials soon with Jacksonville Transportation Authority on Local Motors Olli 2.0 AV in collaboration with Beep, Inc. Roaring ahead, Local Motors just announced a partnership with Liftango to build software for on-demand routing and passenger pick up/drop off for Olli 2.0.
IDTechEx reports predicted these things and the latest one, "Robot Shuttles for Smart Cities 2021-2041" roadmaps a lot more that will come from the Teslas of this industry. For example, sideways docking and all-over microLED advertising and, after 2030, 6G signal routing surfaces will both provide extra income. In 2021, another leader EasyMile licensed Sono Motors structural solar - single-crystal silicon sandwiched in polycarbonate to replace loadbearing bodywork top and sides as seen on the Sion car. It eliminates painting and reduces charging and cost.
Some smart shuttle developers with far greater investment show little sign of such innovation and optimization. They ignore cities asking for the empowerment of the disabled and those on a low income, standing room and carrying 15-25 people when in people mode so road footprint is minimized. A bad idea is four crushed together in a tiny box with no luggage room. Developers adapting large golf cars or van-like minibuses miss the point entirely. Robotaxis are autonomous cars used only for mobility as a service MaaS. When a golf car, van, or minibus is called a robo-shuttle or robot shuttle it is marketing spin, nothing more.
Endera has started to convert Aladdin Parking airport shuttle buses in the USA to battery-electric and this is commendable. They do not pretend they are anything to do with robot shuttles where the word shuttle refers to the symmetrical shape permitting travel up and down paths and into shopping malls, not the repetitive short journey.
As for the multi-purposing aspect, Toyota has its e-Palette robot shuttle. Just like an artist's palette, it lets you create many things. Toyota is even creating a smart city around this concept of a totally new form of transport that may repurpose from mobile restaurant to mobile library, utility workshop and last-mile goods delivery for example.
Some have modular tops for this and, if necessary, repurpose several times in a day; for example, to do the school bus function in bright yellow, then compete with Uber and modernize parcel courier companies. To this end, Toyota has developed an operations management system for e-Palette vehicles based on the Toyota Production System (TPS) ideology. This operations management system will be provided as new functions on Toyota's Mobility Services Platform (MSPF)*2 and will consist of the Autonomous Mobility Management System (AMMS), for connecting to vehicles and the e-Palette Task Assignment Platform (e-TAP).
Raghu Das CEO of IDTechEx adds, "We only consider 12 of the 39 projects we profile to be serious leaders with such vision and progress. Toyota is partnered with REE Automotive in Israel which has an exceptionally wide, flat vehicle platform by putting the powertrain in the wheel arches and wheels. That enables fast repurposing with modules. Auve Tech in Estonia targets waste disposal, not just people and parcels by repurposing its robot shuttles. Dubai promises 4,000 robot shuttles deployed by 2030, starting with MaaS applications and GM says its Cruise robot shuttle is chosen. Significantly, GM sees its stripped-down version serving as a commercial delivery van, easily replacing the tram doors on the side with a larger rolling garage door to access parcels. It hopes to launch both capabilities in 2022. We applaud such initiatives. They are complementary to the parallel rollout of fixed-wing vertical takeoff and landing battery-electric aircraft because those will mainly go beyond the city. We have a report on those as well."
For more information on this report, please visit www.IDTechEx.com/Shuttle, or for the full portfolio of research available from IDTechEx please visit www.IDTechEx.com/Research.
IDTechEx guides your strategic business decisions through its Research, Subscription and Consultancy products, helping you profit from emerging technologies. For more information, contact research@IDTechEx.com or visit www.IDTechEx.com.
Top image: Local Motors Olli 2.0 Render. Source: Local Motors